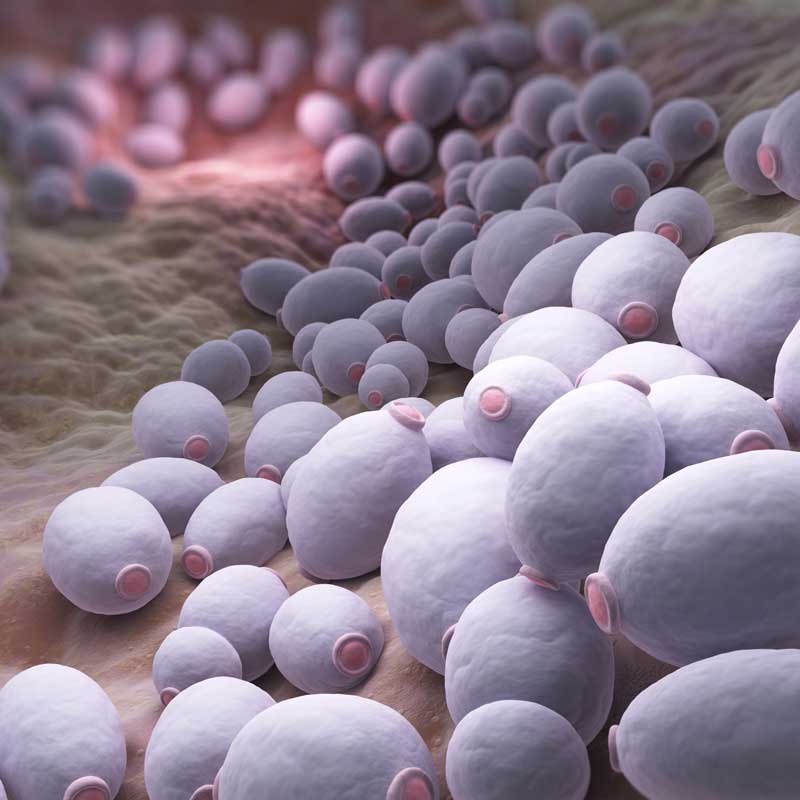 Candida Albicans is a single-cell fungi living in the blood that’s naturally found in human microflora in the GI tract, mouth and vagina, and can cause a number of conditions. This fungi confuses inter-cell communication and is the underlying cause of many health problems. Candida is routinely cited as the most common infectious fungus.

Wondering if you’re affected by Candida Albicans? Take the free questionnaire below to learn more.

Despite being an abundant opportunistic pathogen, Candida does not normally create problems in healthy adults. The problem, however, is that healthy lifestyles are becoming harder to maintain with the increase in readily available, cheap processed foods and a decrease in a daily exercise routine. For adults who are diabetic, immunocompromised or have recently taken antibiotics, following a healthy lifestyle is even more critical. As a pathogenic fungus, Candida has been shown to be the underlying cause of a plethora of health conditions that cause discomfort, such as oral thrush, inflamed skin or genital yeast infections. Studies confirm the most common victims tend to be women; in fact, over 75 percent of adult women will experience vulvovaginal candidiasis (thrush) at least once in their lifetime. Newborns and the elderly follow close behind with Candida that tends to colonise in the mouth, creating oral candidiasis. Both conditions are highly unpleasant – but they have shown signs of improvement with d-Lenolate!

In January of 1999, Dr. Bernard J. Mizock isolated d-Lenolate from the olive leaf and conducted a study to explore the benefits when compared to Nystatin, the typical drug of choice for controlling hypersensitivity to Candida. People who suffered from Candida Hypersensitivity Syndrome took part in a 32-week study. Patients exposed to d-Lenolate had no apparent side effects from the extract and showed a 50-60 percent reduction in symptoms compared to patients taking Nystatin, who showed a 2 percent decrease in symptoms when compared to those who consumed the placebo. While the benefits of this extract are still being explored, we believe it has the potential to heal and reduce symptoms of a host of ailments, including the effects of Candida Albicans.

While there may never be a treatment that offers a completely healthy immune system considering all the pathogens and microbes our body fights off on a daily basis, d-Lenolate has shown much promise with treating conditions to make life more manageable without unpleasant side effects often caused by unnatural chemicals sold at drug stores or pharmacies.

Along with yeast infections and oral thrush, Candida has the potential to irritate the digestive system (considering this fungus naturally calls your gut home). Experiencing constipation, diarrhea, nausea, gas, cramps or bloating can be your body’s signal to you that Candida is the problem.

Long-term, chronic sinus infections such as runny noses, loss of smell and nasal congestion can be a sign of a fungal infection. Any condition under one month is considered short-term and may be the result of a bacteria. Anything that lasts one month or more may have an underlying fungal cause, and other treatment options should be considered.

While joint pain can stem from a plethora of causes, if you’ve recently had surgery, it is possible that Candida has entered the bloodstream, causing painful, stiff and swollen joints. Though it is rare, Candida can also infect bones and become very difficult to treat. The key to keeping it under control is being in tune with your body and catching these symptoms early.

Natural treatments for an overgrowth of Candida Albicans depend on where in the body the fungus has presented itself. For women suffering from yeast infections, for example, healthy lifestyle changes such as reducing stress and sugar intake along with consuming more probiotics tend to be good alternatives to taking over-the-counter medications. Plain Greek yogurt without any added sugar may be helpful for creating a healthy environment in the vagina to control over-growth and create balance. For people suffering from oral Candida, remedies differ slightly. Though yogurt is still a wonderful solution for the helpful bacteria it contains, many people also experience relief from thrush with something as simple as baking soda. Suggested uses include rinsing the mouth with warm salt water – the salt contains antiseptic and cleansing properties, and the heated water is soothing for the infected portion of the throat. Kombucha has gained much popularity recently for good reason. Loaded with probiotics and healthy bacteria cultures, the organisms in kombucha can help control and even eliminate unhealthy levels of Candida. And, of course, d-Lenolate will keep your body healthy before Candida Albicans levels get too high. If they do, d-Lenolate can relieve symptoms as well, so definitely give this all-natural supplement a shot!

Leverage the power of Olive Leaf Extract to help you fight the symptoms of Candida Albicans.